Rip to perform live at The World’s Largest Brat Fest!

CHECK IT OUT, WORLD!!! I’ll be kicking off the summer and #MemorialDayWeekend 2017 at @bratfestofficial (“The World’s Largest Brat Fest”), performing all new songs from my new album, “Trinity”! Saturday May 27, 2017 at 2pm on the #BakerTilly stage!!! Eeeeee. #bratfest#FreeLiveMusic #ItsAllForCharity #BratFest2017 #WorldsLargestBratfest 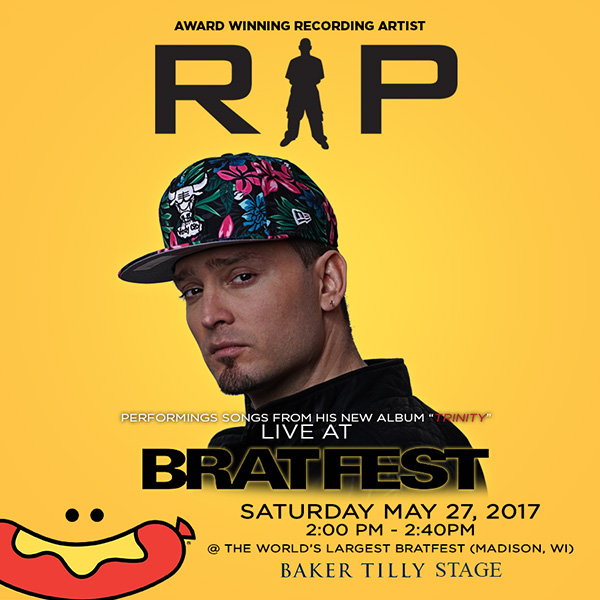 Rip here.  I wanted to take a minute to thank everyone that voted for me and my #RipRecords Family in round 1 of voting in the Madison Hip-Hip Awards!  We truly appreciate it greatly.  With that said, we have made it to the final round where winners are now determined.  If you voted for us in Round 1, voting isn’t done…we have this one last round (which is the most important).  If you could, please head over to:  http://www.broadjam.com/mhha/ to cast your final votes for this year’s awards!   Myself as well as my RiP Records Family are up for a total of 5 awards.  We are up in the following categories:

It would truly mean a lot to myself and my RiP Records Family if they could take home an award for their musical accomplishments for the first time in their musical careers.  Pr, Influence, and TruMotiv (pka Too Bogus) have all been rocking with me since the early 2000’s and it is because of them that Rip is who he is today. Thanks to everyone for your continued support over the years. 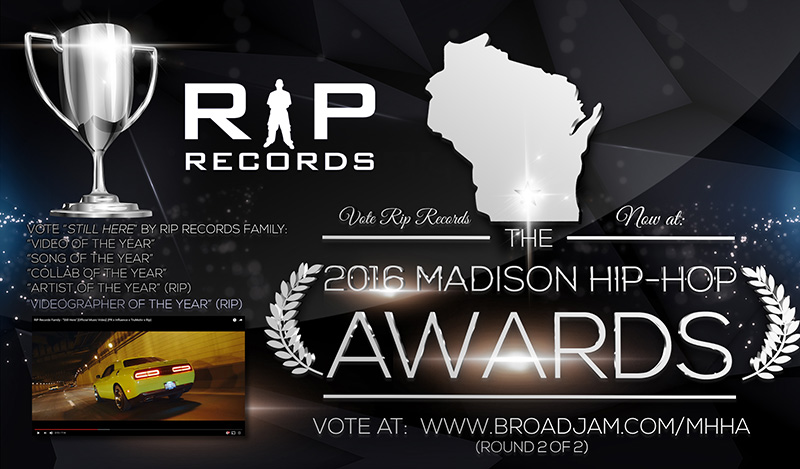 What’s up everybody,  I’d like to ask a favor of you:  Please vote for my #RipRecords Family at the 2016 Madison Hip-Hop Awards  ! Don’t do it for me…do it for them. They deserve it! I’ve already won my fair share in 2013 and they’ve been rockin with me for over a decade. I wouldn’t be who I am without them. Our song “Still Here” is up for: “Video of the Year”, “Song of the Year” and “Collab of the Year”‘.  Show some love in voting Round 1 of 2 at: broadjam.com/mhha (Need ur votes in both rounds!)

Hey everyone, check it out! I just released a new lyric video (& audio) for my new single “New Me” which is off my new album “Trinity” (Coming soon)!!!

April 20, 2016 – Today, Recording Artist ‘Rip’ releases his newest music video, “Still Here,” and announces that he’s back in the studio working on his third studio album, an EP titled, “Trinity.” The album will include collaborations with Sincere and Katie Scullin, along with production by Memory, Rip himself, and co-production by DJ Pain 1. Rip takes you back to his musical roots with his first single, “Still Here,” which features 3 of his original RiP Records label mates from the early 2000’s – PR, Influence and TruMotiv (pka Too Bogus). The video is set in Chicago, the market where Rip & his RiP Records family originally got their start, and was produced and directed by Rip himself. On Rip producing his own music videos, Violator All Star DJ – DJ Fusion had this to say about the video in an interview on his radio show SPXX Radio: “You’ve definitely hit the scene hard with that [your music video production] and a lot of people have noticed.”

King of the Party! – Doritos Crash The Superbowl entry

Check it out everyone!! Got together with my team and put together an entry for the Doritos ‪#‎CrashTheSuperbowl‬ commercial contest! Been wanting to do this for years, and now we have completed an entry. Check that off the ‪#‎Bucketlist‬. I want to thank Rafael Charles Ragland for teaming up with me on this project. I would also like to thank everyone else who made this video a possibility. Couldn’t have done it without your gracious support!

Go here to rate it: https://crashthesuperbowl.doritos.com/video/3127

It’s official everybody! I will be the new face at Lucky’s this year for the UW Badger home games; the ULTIMATE Pre & Post game Headquarters!!! If you want to party and tailgate with some of the best, this is the place to be, right next to Camp Randall stadium! (Check the “shows” section of my website to see dates/times I will DJ’ing there) 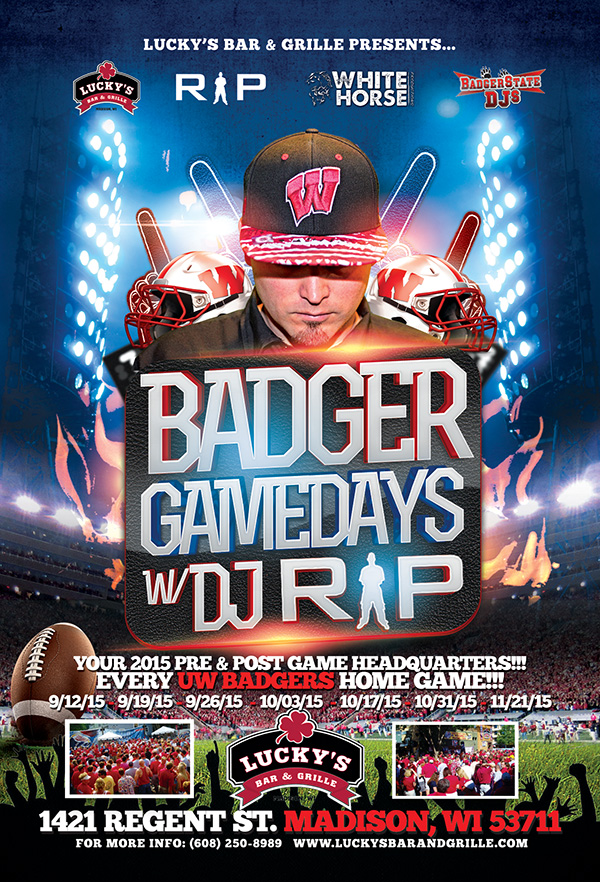 In 2013, 18 year old Aprina Paul from Madison, WI answered an ad on Craigslist not knowing who or what lay on the other end. She was never to be seen from again. Her body was found in a home in Evansville, WI burned to the point where authorities couldn’t prove a murder.

Writer/Director Rafael Ragland and I have been asked by the mother of Aprina to make a movie on this story in hopes of raising awareness of the dangers of internet dating & preventing something like this from happening again.

We are looking to raise $10,000 to cover production costs to tell this story.

For more info on this story, please visit the following links: