(July 6, 2011) – Recording artist Rip releases the new music video and short film for “Kissin In The Dark,” the first single from his forthcoming album “Sellout.”

“Sellout” is Rip’s sophomore effort and follows up his debut album “Fashionably Late,” which dropped last summer. That album featured his popular single “Watchin Me,” which appeared on radio across the country in 2010.

“Sellout” includes production by the artist himself as well as certified Gold producer DJ Pain 1 and certified Multi-Platinum/Top40 producer Gigamesh (Mike Posner “Cooler Than Me”).

“Kissin In The Dark” is a soft launch single off the album with another lead radio single to follow. The album’s release date has yet to be announced. Rip’s debut album “Fashionably Late” is currently available now on iTunes from Island Def Jam.

Find out more about the artist, his music and upcoming projects at his website – www.WhoIsRip.com

DOWNLOAD THIS VIDEO NOW FOR YOUR iPhone, iPad, iPod, Smartphone, Mediaplayer and MORE FOR FREE!!! (Right click and ‘save link as’) 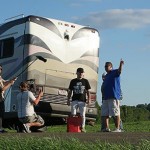 JUST ANNOUNCED – Rip to perform at B96 Summer Pre-Bash!

This SAT at 2:30pm at Toyota Park in Bridgeview, IL

Live from the World Famous “Brat Fest” in Madison, WI

Check out the Juke Remix to my cut “Unbreakable” done up by my hommie DJ Baddmixx!

Head over to the “Buy Music” link now to order a copy of “Fashionably Late” on CD, or you can get a digital copy now on iTunes or AmazonMP3 from Island Def Jam Records!

Welcome to our new site!

Welcome to my new site!  Hope it’s easier to move around than the old Flash site.  Please sign up and check back often.  As always, thanks for all your luv and support! – Rip

My heart is sad for a few reasons today...but truly my biggest sadness is for people whose lives literally hinge on… https://t.co/ZO0nUFDM6m